SHOOT CANDY AND BE THE LAST BURRO STANDING.  If you're lucky, you might be selected to be the Mechaburro!

This is my submission for the first Bevy game jam! The theme of the jam was "Unfair Advantage." I hope you enjoy it and hope you're lucky enough to be picked to be the Mechaburro! Let me know your thoughts in the comments and vote on all the submissions in the jam! Check out the Notes section below for how to play,  information on known issues and suggestions for how best to run the game.

¿Quién es el MechaBurro? is a singleplayer/local multiplayer game (up to 4 players) with bots (8 total burros) inspired by twin-stick shooters, aspects of mario kart and a card game I played with my family growing up called "Burro."

Players choose to play as one of 8 different burro piñatas and then attempt to be the last burro standing in each level of the game. Burros can shoot candy in just the cardinal directions but are able to move independently from where they're aiming. When hit, burros will flash momentairly and be invulnurable to damage but will also be unable to shoot. Shot candies have a limited range before disappearing and burros have a cooldown period before being able to shoot again.

At the start of each round, one burro is chosen randomly to be upgraded to the Mechaburro. The Mechaburro shoots lasers which travel faster, have a much larger range and also experience a shorter cooldown between shots.

Rounds ends when only one burro remains or 5 seconds after all human players have lost. Points are based on order of elimination with the first eliminated getting 0 points and each burro after getting 1 more than the previously eliminiated burro. Points are accumulated across rounds and the burro with the most points at the end of the game is declared the winner.

If using a browser, this game runs better in Chrome versus Firefox, and the downloadable executables work best.

The game supports 4-player local multiplayer, just try not to unplug or plug in anything while the game is running. If you want to play with multiple people, make sure the controllers are plugged in before starting the game.

Also, the controller support can be a little weird across controllers, sometimes the mapping of shooting north and shooting west are inverted unfortunately.

Plugging in a controller will sometimes make the keyboard no longer playable.

Avoid the candy from other burros, if you get hit you can't shoot while you recover!

Piñata - the traditional piñata we all beat up as kids

Meow - colored and named after my cat Meow

Morir - the opposite of Salud

Aguas - watch out for Aguas!

Gators - the Gator nation is everywhere

Source Code can be found here 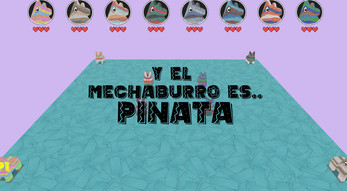 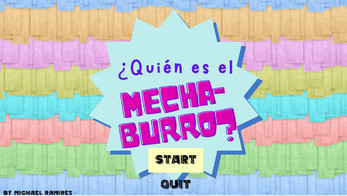 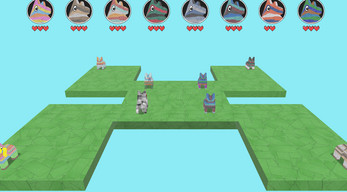 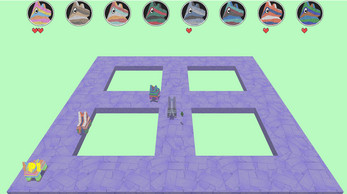